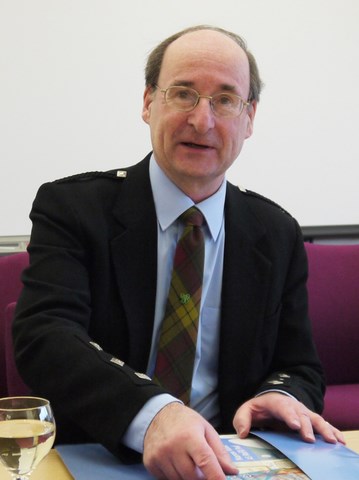 Highland Roots was founded in the late 1980s by Graeme Mackenzie MA, who's pictured left. Graeme won a scholarship to study history at Cambridge University, and after graduation taught the subject part-time while working in a number of other jobs, including pulling pints at the historic “Eagle” pub – where he created a cricket team and helped organise the Cambridge Pub and Social Clubs Cricket League. In the early 1980s Graeme created local music magazine “Blue Suede News”, and became a part-time presenter on BBC Radio Cambridgeshire. He was also involved for a number of years with the committee that organised the world famous “Cambridge Folk Festival”. In the mid-1980s Graeme’s BBC work moved into the production and presentation of music and current affairs documentaries, and in 1986-87 he conceived, researched, wrote, and presented a major ten part historical series – “A Power in the Land” – which looked at national history from a regional perspective, and was one of the first such series to be networked on local radio.

It was whilst researching East Anglian families for this series that Graeme began to take an interest in genealogy; and this was eventually to lead him to return to Scotland to investigate his own ancestry, and to learn all the Scottish history he'd missed whilst studying “British History” at an English university. In 1989 Graeme set up as Highland Roots in Inverness with the intention of specialising in the history and genealogy of Highland clans. Though he’s subsequently had spells living elsewhere in Scotland - particularly in Edinburgh, where his father and grandfather were born - his spiritual home remains the “Capital of the Highlands” where he’s an active member of the Gaelic Society of Inverness.

In 1993 Graeme was appointed Curator of the Clan MacMillan International Centre in Renfrewshire, with a particular brief to organise the collection and publication of information on the clan’s history and genealogy (a connection stemming from his grandmother Catherine Macmillan who came from Glen Urquhart on the shores of Loch Ness). This involved building the first Clan MacMillan International website and creating Project MAOL (Macmillan Ancestry On Line). Graeme’s also been instrumental in organising a number of successful clan gatherings, with tours, talks, concerts, pageants, and ceilidhs - including significant fund-raising elements for the major charity that was founded in the early twentieth century by a bard of the clan; i.e. Macmillan Cancer Support.

Since 1995 Graeme has acted as Seanachaidh for Clan MacKenzie, compiling material on Mackenzie genealogy from published sources and through research commissioned from him by individual clanspeople; and he served for two years as Chairman of the Clan Mackenzie Society of Scotland & the UK. In the course of his work as a professional genealogist he's collected a considerable amount of information on other Scottish families and names, and is pursuing a particular interest in the nature of the Scottish clan, and the evolution of the so-called “clan system”. His involvement with clan gatherings has given Graeme considerable experience attracting overseas visitors to the Highlands, which led to him being invited to join VisitScotland's Ancestral Tourism Group. He was also a member of the Clans and Families' Forum set up in 2014 by the Scottish Government. These two groups are now combined as the Scottish Clans and Ancestry Forum.

Graeme was Chairman of the Highland Family History Society - an organisation with hundreds of members worldwide - from 2007 until 2013, when he became the founding Chairman of the Association of Highland Clans and Societies. For many years he's been attending Highland Games and Clan Gatherings in Canada and the USA to meet and talk to MacMillans and MacKenzies, and to give presentations and lectures on Scottish history and genealogy at Celtic Events and to Scottish Interest Groups. In 2014 and 2019 he undertook lecture tours in New Zealand and Australia. See Presentations for a list of lecture and seminar topics that Graeme can offer.

Graeme has written extensively on Scottish clan and family history, for which see Publications.